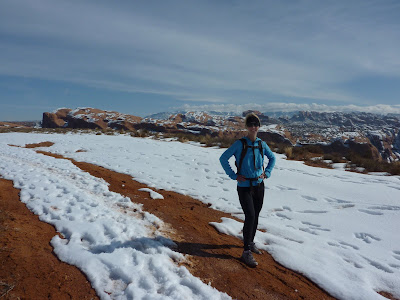 My anxieties were growing Friday night when I picked up my packet for the Moab Red Hot 33k. The room was buzzing with all kinds of “we love running” and “we love running together” energy. I felt lonely, but gave myself a cheesy little reminder to relax and focus on the fact that the challenge will be meaningless if I don’t learn more than I already know. 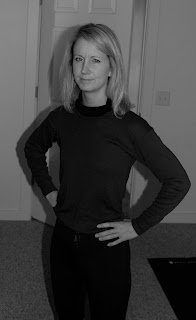 Off to a rocky start at the condo, my Birthday Challenge morning started out with a lot of fear and frowning. At the starting line, everything changed. Everyone was so… nice. Edwards, of course, knew people in the field and they immediately invited me to run with them. This little group split up within the first mile but their support got me off-and-running. 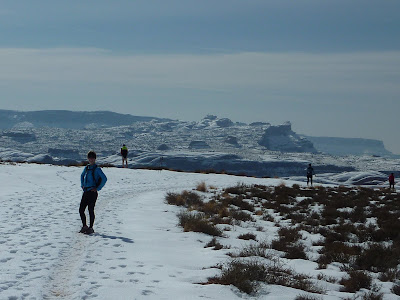 After running alone for a little, I found another girl – not chatty – whom I would begin a game of “leap-frog” with. Looking back I guess I would have passed her and stayed ahead the whole race if she hadn’t gained advantage twice when I a. got off course and b. hit the deck when my right foot slipped in an icy little divot. I didn’t realize it because she’d taken her jacket off, but I passed her on the way to the finish line. She was walking. I hope she wasn’t injured and I do appreciate that she always gave me someone to chase after.

From mile 8-12 there was George. George runs with two walking poles and I was very envious (just imagine the pressure I could take off my hips if I had my own walking sticks)! George was super nice and tagged along behind me encouragingly for quite awhile. I thought maybe he was just going my pace, but then I saw a picture of my backside, which I believe explains his company a little better. 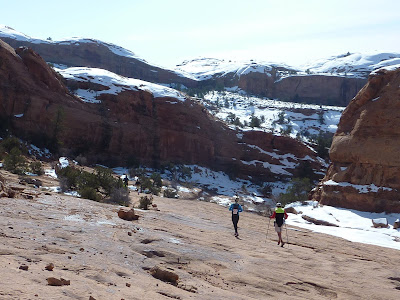 With so much inspiring scenery, I'm flattered to have had George right behind me.

When Edwards met me at the halfway mark it was a curse and a blessing. First, the curse. When my man showed up something in me got all “girlie.” My man had arrived! How had I survived without him? How was I going to survive without him carrying me? No matter how much I tried to ignore it, I couldn’t help the emotional shift that happened when Husband got there. Mostly though, it was a blessing. He scouted the course, found easier routes, let me know the last aid station was a lot further than it was supposed to be, gave me water, talked to me, encouraged me, popped Cliff Blocks right into my mouth, and took pictures. He was just fantastic.

The elevation map they published pre-race was a bit of a sandbag. The steep uphill part was correct, but the steep downhill part? I guess if they mean the last 2.5 miles (not the last 9), sure… It made 6.5 miles a lot longer and harder than I had pictured, but, what was hard? The whole thing was quite miraculous. I was running, in spectacular country, I didn’t care about my time, and I was smiling. 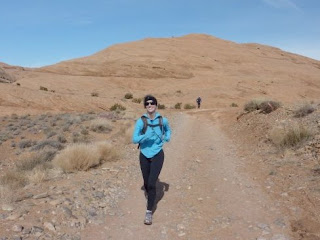 I didn't even know I was smiling, that's how good it was.

I was surprised to find near the end that although I expected to have gas left in the tank to power up for the last few miles… I didn’t. I had enough to coast in at a reasonable pace, but there was nothing left for a glorious, arms up finish line performance. I guess for a Birthday Challenge, you know you picked a good one when you have just enough fuel to finish. 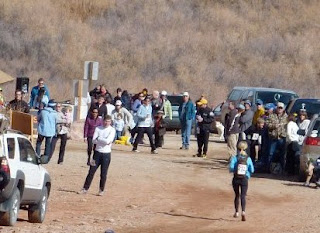 You can almost see the word FINISH between all the people. I was SO excited to be there!


My time was a surprise. 4:34 minutes. Since 6 hours was my goal, I was very, very happy. Despite natural inclination, I continue to NOT compare myself to other people. I did AWESOME for me. It was difficult. It was further than I have ever run before. It was a magnificent way to spend my birthday.

WHAT I LEARNED: I can run 33k on a trail in less than 6 hours. I can turn down "the noise" and have fun! 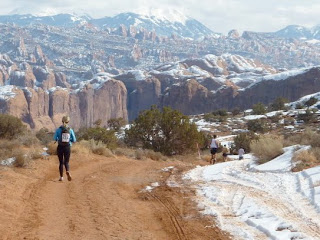 Look at the little girl "gaining" on those lean ultra-runners! 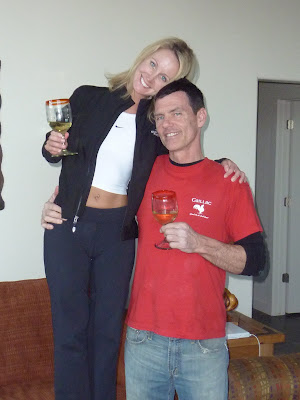 Celebrating with a little Veuve Clicquot and conspiring for next year... 34.
Posted by Lisa Romney at 5:57 PM

All I can think to say is the very silly and cliche "You Go, Girl." But really-- you go! You should feel crazy proud and I am glad you do. It almost inspires me to try one, almost...

TRY ONE! A shorter one. Train with me. I promise I am NOT FAST!

Never say never. My wife was awesome, and all the way home she kept talking about bigger things.

Wait a minute....GEORGE ran with you? Did she, um, you know...show you anything to get you motivated? Do tell...

Nice write up and Challenge.
Congrats.