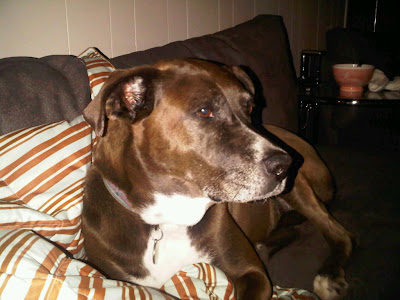 When I first saw Beata she was waiting in the car with Tori. I didn’t know which of the two dogs she was, but I hoped that my dog-to-be was the brown one with the perfect little brown eyes, little brown ears, and white striped nose. Cara said, “which dogs is cuter… be careful…” and then didn’t make me actually tell before introducing me to Beata: The little brown dog.

It was just supposed to be an overnight visit to see how we got along, but once she chewed up my Harvard graduation flips-flops there was no going back.

She was a little angel of a puppy. We jumped feet first into training and mastered sit, down, off, stay, and heal without any hitches (and in two different languages). “Come” was another story, but all I ever really had to do was turn my back and yell “Bye-bye” for her to come sprinting over, with a smile on her face, excited about wherever we’d be going to next. Devoted but independent; Attentive but ADD. My little Beata.

For years, Beata put up with my long hours in the Mayor’s Office, even walking in with me on weekends for another boring day in the office. She got time in the wilds during the week thanks to her dog walker, Russin, and when we weren’t urban hiking to the office… we were playing together in the mountains. She was a funny little thing. She got out of her collar once and got to explore the Wild Oats on 4th South, she was always a good girl and never tried to eat Rocky’s parrot, Cardozo, and she kept intruders away from the house with her terrifying, bloodthirsty bark. She had a nice life. She was my constant, most patient, and most loving companion.

She also had her pack at Cara’s house. Tori, Copper, and Drizzit. Her best friends: two pit-mixes and a great dane, a formidable bunch. They grew up together. Drizzit, the Great Dane has recently passed, Copper and Tori are still with us. If ever I wanted to get her excited all I had to do was say, “Copper. Tori. Drizzit?” Sweet little girl would perk up and stare, shaking in excitement at the prospect of playing with her friends.

I have to admit to asking Cara to readopt her while I tried to make the worst relationship of my life work. The only good thing that came of this… ending the relationship and getting her back. This time, Steve Edwards was her gift for coming home.

Beata took to Steve like most girls take to tall, dark, handsome men. She became his groupie. She still liked me, but she absolutely adored him. His working from home allowed her to do nothing but stare at him all day. And she did. The cutest little Steve Edwards fan in the whole world!

The last two and a half years her life, that started out abused and abandoned, had become pure perfection. She had a loving boyfriend in Tuco. She got to play outside in the mountains or on the trails every day; she was an awesome, awesome rock climbing “crag dog”; was a bundle of irreplaceable joy; and made up the fabric of our family. We became the 3 generations of Romney-Edwards. Grandpa, Mom and Dad, and little girl flirt. She never wanted any trouble, only to play, sniff-stuff, be chased, chase gophers, and be with her family. While her love and concern for me was overshadowed by her love for Edwards, she was always, always happiest when the whole family was together.

Now, our family is minus one and I cannot believe she is gone. After a year of different vets misdiagnosing her with arthritis, we did our research and found out she had a torn ACL. We went to a veterinarian on a recommendation, looked up his credentials, met him, liked him, and committed to surgery. Unfortunately, he sent us home with a medicine that turned out to be nothing more than pure poison. He never said a word about the dangers. We were foolish enough not to research them ourselves. Previcox. "Just an anti-inflammatory". Never, ever give this to your pets. http://www.k911.biz/Petsafety/DeathByPrevicox_RowdysLastVacation.htm

For the past 9 years Beata has been my friend, family, and love. She has never judged me for my choices in food, films, music or men; or even been mad when I tell her not to bury her bones in the garden (because she always did it anyway). She never wanted anything more than to be loved and not abandoned. She was the cutest, sweetest, most loving little dog. My heart aches that I will never see her wag her body at me again, or get to cuddle on the couch with her while Edwards is on business trips. Edwards and I lost a vital member of our family last night, and Tuco lost his “girlfriend”. Every day she brought him energy and life.

I probably won’t stop talking to her for a very long time. And how will I deliver sour opinions of my husband's hygiene if she isn’t there to pass on the word? I plan to cry for days, and weeks, and years. I feel robbed. Tori feels robbed. Copper feels robbed. Cara feels robbed. Tuco feels robbed. And Edwards is the most robbed of all. She was our joyous, bizarre, beautiful little brown dog. I love her so much. I will always have a hole in my heart where Beata should be.

(more pictures to come. Top: A picture from the last evening we spent cuddled up on the couch together.)
Posted by Lisa Romney at 8:50 PM 5 comments: