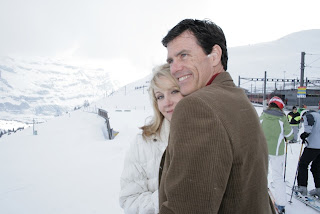 Romney and Edwards
Posted by Steve Edwards at 9:47 AM 18 comments: 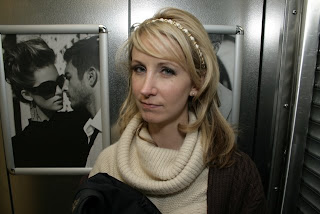 It is very strange for me to be married to a Candy Martian. This man knows absolutely everything about the nutrients of food, health, supplements, doping, fitness, etc. etc., and absolutely NOTHING about the beauty of refined sugar. To illustrate, he thinks disgusting purple gummy octopus are somehow comparable to red delicious Swedish Fish. Each time he’s allowed to shop for movie treats, or to venture into an AM/PM to procure candy, I’m reminded that his confectionary confusions are endless. In summary -- I'm picking the wedding cake for our party, alone.

Another thing about Edwards is that he finds bad customer service amusing. He seems to have a neverending array of anecdotes about rude or inept retail experiences to draw from. He doesn’t talk much about good service; but if we happen to step into a place filled with overtly rude or hapless employees he perks up and seems entirely happy. He even talks about hiring such people. One of his favorite employees was apparently a girl named Kelly who was so offensive to customers that she had a cult following. “Sure,” he says. “Sometimes she’d piss customers off so much they wouldn’t come back. But it was entirely worth it because she was so amusing to so many people. She even had her own coupon that went something like, ‘make Kelly mad, get two for one. Make Kelly smile, get three for one.’” Edwards should have been with me today.

I popped into two local bakeries to begin my cake my search. The first shop, Backers, was super nice. I told them I was "just starting" to look for a wedding cake. They handed me their album and said, "Stephanie can answer any questions you have." I had questions and Stephanie had answers. I walked out of Backers Bakery with options, prices, sizes, servings, and a timeline. Great. Thanks, Stephanie.

Next stop was Pierre's. A place with a top notch reputation near our home, where I have previously purchased baked goods without incident. There was a promising wedding cake display with two wedding cake albums, but no one was at the counter so I started to have a look.

After a few minutes, a girl finally emerged from the back. "Hello", I said. "Hey", she mumbles back. "I've just started to look for cakes." "Grunt." Alright, not terribly warm, but no biggie.

They had an option that looked interesting but I had some questions... "Can I ask you some questions?" She looks around as if to suggest “are you talking to me?” "Sure," she answers with a shrug (at this point I am the only customer in the store). "What kind of frosting do you use?" "I don't know. You'll have to call and ask the baker." She then disengages and if she’s got to help someone else but, as I said, there’s no one else in the place. I hadn’t meant to through her off. I would think this a pretty standard query for a store that specializes custom wedding cakes.

“Um, then is there a time when the baker will be here to discuss options?" She looks at me like ‘what? You’re still here.’ "I'll just go ask her, she's in back." (Really? She's in back and you told me to call?) She comes back she says, "We can do any flavor... We can do chocolate." (Hmm, well, that wasn't my question, which was more along the lines of what kind of frosting, like, Fondant or Butter Cream? Guess I could have been more clear...) "Okay... well, do you think I could ask her a few questions?" She looks miffed at why I would want to do such a thing then says, as if I pushed reset, "Let me go ask the baker…" A minute later…"No, she can't answer your questions right now." I want to ask her if her name happens to be Kelly but decide, instead, to actually try and continue my quest.

"Is it best to schedule a time to meet?" "Well, let me go ask the owner if she can talk to you." (So the owner is also in back. Is it strange to think they might want someone in front that knows something about the business?) At this point a mother and daughter have come in very excited to pick cookies. They are being ignored while I’m being treated as such an imposition that the owner needs to be summoned. “Kelly” emerges from the back, "She's not here, you'll have to call." "Okay. No problem." But then a mystery man from the back (how many people are back there?) hands her a cell phone. She rolls her eyes and mouths, "this is her." The part of the conversation I can hear goes like this... "There is a woman here who wants to talk to someone about a wedding cake.... Yes, I know all of that, that's why I'm calling... fine, okay." Hang-up. Then to me, "I'll have to get her card so you can call..." (Have to? From where? Aren’t we IN her business already?) Now there are three additional customers in the shop, also all being ignored. She has to walk to the other end of the counter to get the card. When she gets there one of the customers says, "Hello." She completely ignores him. She walks back and explains what number I'll need to call. "Great. Thanks." No, I won't be calling. But my husband, I’m quite certain, would.
Posted by Lisa Romney at 7:15 PM 3 comments: 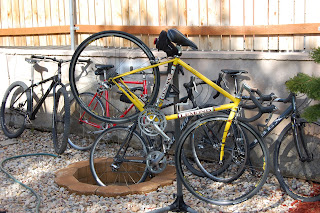 Not to be assumptive, but people have been asking where we're registered, so...

To re-iterate, we really don't need much. In fact, we've spent the last month getting rid of stuff. We could have used some things before our move (probably why people have weddings prior to buying their house together) but that stuff has been purchased so the house looks nice when you get here. Maybe we should set up a reverse registery where you can buy the stuff in our garage we're selling.

We do, however, really want/need a Tandem Bicycle. We are trying to find the best deal, best design, best color, best fit, but with our rings, wedding, and new home, new landlord status (when are rents going to adjust around here?) this is a distant hope without your help. Anything from $5 to $5,000 will be met with immense gratitude. It seems impolite to ask for cash donations, but we swear it will be going straight to something tangible (or necessary, depending on your interpretation).

To offer you a more traditional option... we have also registered our few needs at www.target.com. You can find our registry under either of our names. Be assured, anything on this list we really do want and need--okay, maybe the Saeco coffee grinder is a little over the top but Edwards says we should support them becaues they sponsored a pro bike team for years.

Finally, creative and innovative gifts are always welcome, of course. We particularly encourage Salt Lake City locals to shop Local First. A list of locally owned businesses can be found at www.localfirst.org. Please keep in mind, we combined two adult households. There was a lot more purging than buying. We don't have room for much, though Edwards did find space to squeeze a tandem into the garage.

For you out of towners, please rsvp asap, especially if you'd like to stay at the Monaco. We should be able to get rooms there for around $120/night. We'll probably have dinner/drinks at their restaurant on Friday night.

pic: bike wash day. seriously, we need more bikes. there are only two more out in the garage.
Posted by Lisa Romney at 12:09 AM 4 comments: