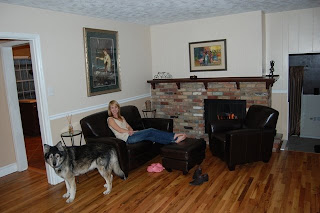 We'd love to house all of you but we can't, so here are our recommendations.

a. Hotel Monaco: In the heart of Downtown, this boutique, award winning eco-friendly hotel is the best way to experience Salt Lake City. Because we rule this town, we were able to get our guests a special Romney/Edwards wedding rate, but you must let us know ASAP if you would like to stay here. The rate will not be more than $200. Likely closer to $120. Has an excellent restaurant and cocktail lounge. Doesn't just take dogs but encourages them. Romney says, "I would live in this hotel if I could." Ratso says, "wooooooooo." 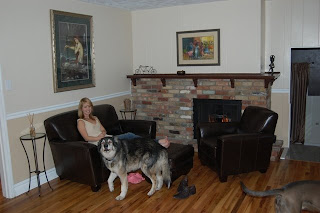 b. Marriott University Park: You will need to book this on Hotels.com. The rate there is very good. $89.00 per night. This hotel has excellent access to the Bonneville Shoreline Trail and the highways that get you into the canyons and Park City.

c. Super 8 on 600S: Cheap, wi-fi'd, takes dogs, across the street from Brewvies where you can get a burger, pitcher, and film for under 20 bucks. Edwards says, "If I were looking for crack in SLC, this is where I'd start."

Summary: Everyone should stay at the Monaco but both it and the Super 8 are essentially downtown and freeway access between 600S and 2300 E (where we live) is dead easy and quick. A slew of other hotels are here, too. The Marriot is up near the university and a killer deal but less convenient for everything except riding your bike--but it's excellent for that. It's even excellent for riding your bike to our house and, while not far from our place, you will need to go through a few stops lights if in a car.

Email or call and we'll try and arrange things. We'll have at least one extra car and we should be able to arrange shuttling people around a bit. Let us know asap if you'd like to stay at the Monaco. The more people we get the better our rate is likely to be.
Posted by Steve Edwards at 11:06 PM 1 comment: 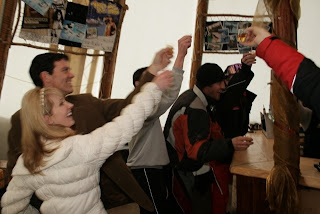 Mark your calendars. We've announced a date for our first party/reception. It will be May 31st. Details to follow but if you've found your way to this page you can be fairly certain that we'd love to see you here. Please let us know if you'd like help arranging anything. For those of you from out of town we will make it a weekend so pack your bikes, boots, and traveling bar.
Posted by Steve Edwards at 9:04 AM 12 comments:

Don't Call It "The Burbs" 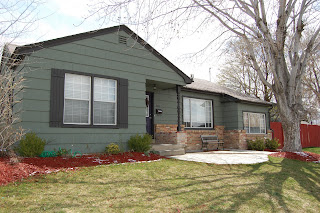 We moved to our new home in Canyon Rim. The convenience of living with my husband would be OUTSTANDING... if we had gas for heat and hot water (Edwards is working on this). Right now, the convenience of "family movie night" is pretty impressive, all of us curled up watching a most enjoyable cycling moving called, The Flying Scotsman." It is pretty cool. We really are married.

Moving went smoothly, unpacking is coming along, and decorating is just a thrill that Edwards can't seem to get enough of!

Here a few pictures. Schedule your visits to our guest room soon! 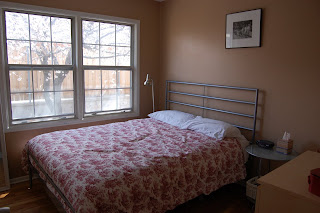 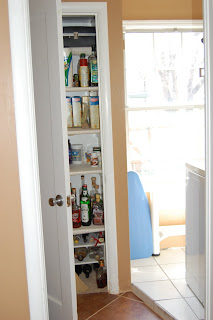 pantry with drink supplies for our guests 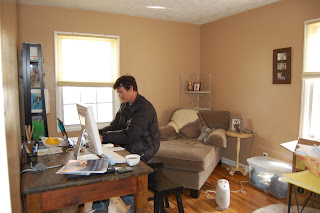 Edwards at work in the half-unpacked office 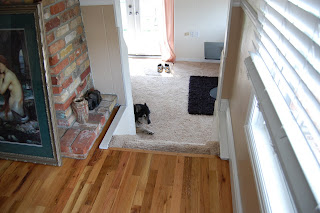 Ratso staying out of the way down in his "cave"
Posted by Lisa Romney at 12:28 PM 6 comments: 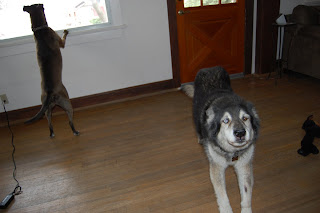 Beata, it means "the blessed" in Latin and "newest addition to our family" in Romney-Edwards speak. She was my beautiful little pit-bull/probably Vizsla mix whom I had to give up a few years ago. Today, we got her back. 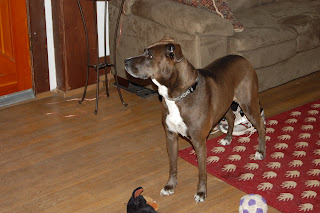 Ratso "likes" her. Of course, he's hoarding toys and just made it clear she is not to touch his ball. Our sweet little Pit is pretending like she couldn't clobber his 13 year old butt and defering to the older, wiser dog who gets to be off-lease when she doesn't. She's not stupid. 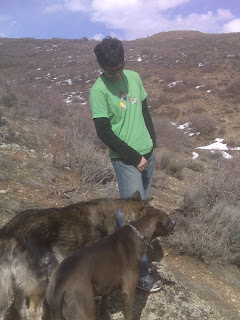 She's seven, and still a spaz. She's bilingual, fluent in Irish (Gaelic) and English commands, and will make an excellent running partner for Edwards. Oh, and the treasure we buried just got a little safer, because if Ratso snarling isn't scary enough, the blood thirsty pit bull should be. Thieves and Scallywags beware!

Of course, good people and their puppies need not worry, because she is super sweet and happy. Probably just happy to be home. 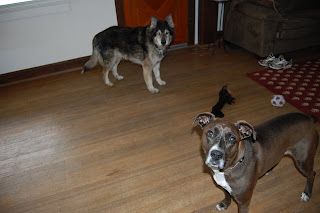 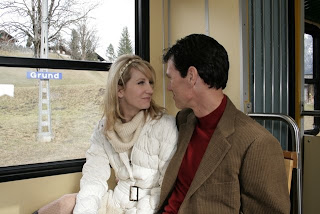 I woke up to this message from my wife, who is away at a conference in Baltimore. “I knew something cool was about to happen when I got all giddy about my new friend who did not want to sleep with me. So cool that now I cannot sleep without him.” Not sleeping in Baltimore probably doesn’t seem odd to anyone versed in the work of John Waters, but this inspired me to shed a little light on the story of us.

Lisa and I have always been inseparable, in the most serendipitous kind of way. We just didn’t always act on it. We met through our friend Marti, most randomly, and spent an entire night talking. She asked me to walk her home. Rae Dawn (my fixie) and I happily acquiesced. She was special, I could tell. But no moves were made. No info exchanged. We were both just out of relationships and I was quite content to be doing my own thing. Besides, I knew I’d see her again.

We’d meet randomly at hippie (Alchemy, our local coffee house) with Marti and the Gym Jones gang. We’d gravitate towards each other until we found ourselves alone, the others long departed, bantering endlessly about politics, social issues, music, bad (and even sometimes good) movies. The MST3K connection was too much.

“Let’s get back to this Mystery Science Theatre thing.” We opened our phones.

Our first email interaction made me smile. She could write, too—an elusive talent in this day and age. And the banter exchange accelerated.

We transitioned to another phase with no hesitancy but plenty of reserve. I was referred to as her “bad habit,” which suited us just fine. We were single; and committed to stay that way. Ben heard her reference apologized. “No,” I said. “It’s perfect.”

But it wasn’t perfect. As much as we tried to avoid it, life was better as Romney/Edwards. Our resolve was weak. When one wouldn’t call; the other would. We accelerated. And this wasn’t a part of either of our plans.

“We should just get married or go back to being friends.”

A quip is all it was. But it, too, accelerated because we both knew that it was true. The problem was that we were good together. Really good. A different experience for both of us; one that didn’t fit into our immediate plans. We weren’t ready. The latter was enacted.

It was a disaster.

You can’t plan love. You can’t plan life. Not if you’re an explorer, anyways, and we were both decidedly that. So we switched to the former and nothing I’ve ever done has seemed so natural.

There was only one thing left to do….

Our campaign had one evening in Zurich and the polls suggested that we spend it kissing hands and shaking babies downtown. This put us within heal-toe,ing distance of the Opernhaus Zurich. (the opera house). Cosi fan tutte is how I know I've picked the perfect running mate... 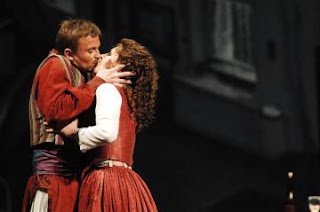 It wasn't just the flawless acoustics and brilliant performances that made this the most memorable opera of my life. It was sitting next to my perfectly capable, athletic, little boy of a husband, whose idea it was to go that night, and knowing that I want him sitting next to me forever.

Apologies, don't vomit, cut me some slack. After a marriage ceremony that started with a quote from U2's "Still haven't found what I'm looking for," (not shittin' ya) attending the opera was the perfect way to spend the last night of our honeymoon in Zurich. AND, we walked home along cobblestone streets in lightly falling snow... you can't fault me for being sentimental.

Skiing Under The Eiger And Posting On Our Blog 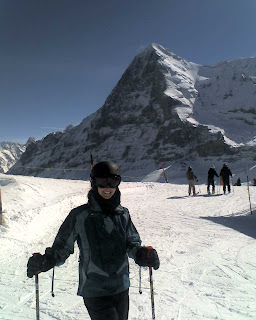 Sorry these pics suck but a camera phone was all we had whilst skiing. Nice scenery, no? The ski area is epic. Romney, who's a much better skier than I am, hurt her knee on day two (well, it was hurt before--sorry, Kevin, we've been way slacking on taking care of it but we will now) which squelched our plan to do a huge ski tour. From our hotel you can ski down one mountain, tram and train up the other side to the Schilthorn (from James Bond's On Her Majesty's Secret Service--oh, the bad film references just won't stop in our lives, which is what happens when MST3K is the catalyst for your relationship), ski down that entire mountain, tram over another, ski down that one, up another, down it, then take the train back up to the Kleine Schedeigg. It's like a massive ski mountaineering tour except you don't have to walk up. In the pic you pretty much ski everything in site, which is all included in one ski pass.

Since some pretty computer saavy people have been having trouble commenting I'm going to post instructions. If it still doesn't work just send us an email and we'll post for you. First off, the comments are in a pop-up window so if you have those blocked you need to allow them on the site. Then you just follow the prompts. Write you comment and choose Name/URL as the posting option, which will allow you to add your name. You don't need to fill in the second line. That should be it or, for a more appropriate film reference, picture Freitag pointing to his proposed new route on the Eiger and casual waving at the steepest and most intimidating part of the face and saying, "Then it's up to the top." 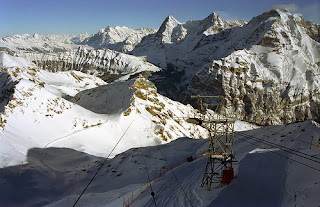 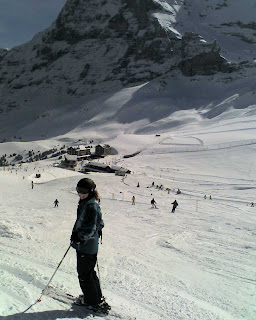 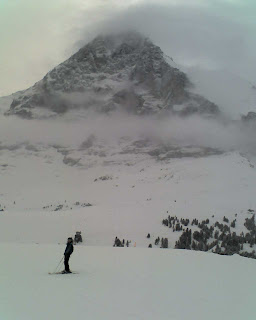