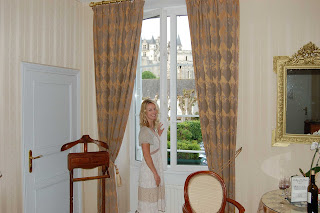 How happy am I in the Loire Valley?

I spent just three and a half weeks there and my entire being still aches to be back in Europe; Alisa and Bruce no doubt see this coming and are aching to figure out how not to leave!

This day started out with a visit to a B&B that might have served as a viable option for Bruce and Alisa to stay on the continent. Might have, had it not been saddled with a satanic past. It was gorgeous, but I’m pretty sure the low price was not because the owner was anxious to be generous… it was cheap because she was anxious to disconnect from it.

The B&B did take us within walking distance of the glorious village of Cordes, so after I ran screaming from the house of the well, I high-tailed it to Cordes for a few hours of shopping. Shopping without Edwards hurrying me on to the next café or a spring classic bike race! This was my only chance to get any real souvenir shopping done and I do hope my mom and sisters like their gifts! 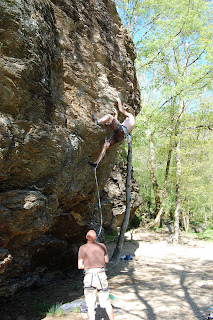 Edwards climbing at the Roc de Gorb with Bruce on belay.

After finally, no thanks to the South African realtor, reconnecting with Edwards and the group, we all headed out to the Roc de Gorb for some climbing. Bruce, Alisa, Ben, and Anka cycled there, while Edwards and I took the Hippo. It was nice to see Bruce harnessed up again, and to see him kill a few routes. It was humbling to see Anka so comfortable on her first climb. Darn athletes and their darn athleticism! 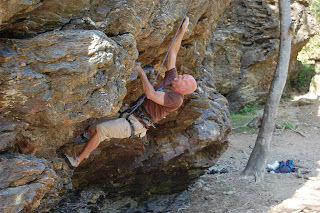 Bruce and how he feels about climbing now-a-days.

Later we had dinner in Najac where I learned that there is nothing better than dinner with new friends, old friends, and a view of a castle. I recall that the hot chocolate crepe we had for dessert was so tremendous that it made the entire dinner; whatever it was, fully spectacular! The great addition to the evening was Fenwick, Alan’s dog, the little black version of Ratso. He came in and said hello, but was shortly off to do whatever it is smart, independent dogs do. At the end of the night he came running to Alan’s whistle… just like Ratso would have. It was a cute goodbye to very good people: Ben, Anka, Alan, and sadly, even Alisa and Bruce. The next day we’d be off to the Loire Valley. 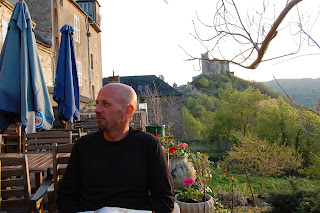 A perfect setting for our last meal with friends. 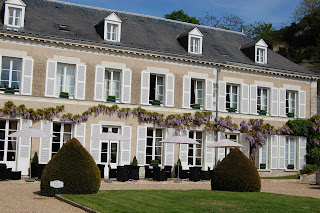 After much gratitude to Bruce and Alisa, as well as leaving some climbing gear in case Bruce decided to get out again, we departed to do girl stuff. I’d been a (pretty) good sport about all the cycling and climbing, but I wasn’t leaving France without seeing some fairytale castles!

At Alisa’s suggestion, we booked a room at the Manoir Les Minimes. When we arrived, it could not have been more perfect. I don’t know how to describe it, as I’m not well versed it period furniture, or the different flowers that bloom in France, all I can say is that this was the France that the little girl in me recognized and adored. 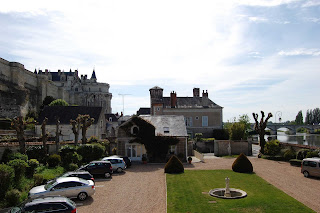 Our room was number #12, with a view of the river and the castle, and parlor area in which to enjoy it. The windows were “storybook” perfect and opened to the scent of the freshest purple blooms. I was certain a blue bird would alight on my finger and we would have a song together. Didn’t happen. 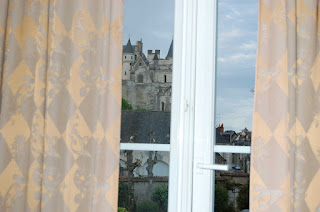 Out our perfect window

While I could have lounged in my French Style princess suite for the entire afternoon, Edwards has no patience for such things. We set off to see the home where Leonardo DaVinci spent this last days and to tour around Amboise. The trip to Leonardo’s house was most intriguing; I still can’t get over how many things he invented. The anemometer? We use these to site wind farms today. 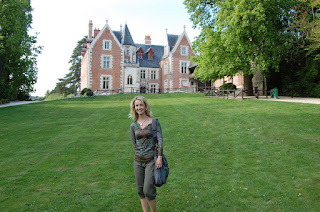 The home where Leonardo daVinci spent his last days.

Next we strolled down Town Square and had our first Ricard in France. We sat next to the Amboise castle wall at a bustling café. Edwards ran down to the shop and purchased tobacco and rolling papers for a smoke with his pastis. He’s so adorable. 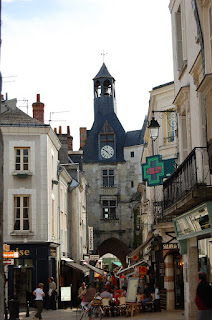 Our concierge booked us dinner at the best restaurant in Amboise - Pavillon de Lys. The establishment has one seating per night and they had one table left. It was the most incredible dining experience of either of our lives. They had two menu choices: Menu or Menu Legumes. I did the Menu Legumes and this is what I had:

Tomato soup with cucumber cake – in a glass, with a straw.

Two courses of soup and 5 desserts? This meal must have been designed for me personally and it could not have been more perfect.

Edwards had the Menu and with it came four goat cheeses that were unlike any cheese we have tasted on the planet. Surely Wallace and Gromit found them on the moon. They were absolutely spectacular. This is what happens when you can use raw dairy.

After dinner we walked down the dark, narrow streets. It was so beautiful it reminded me of Zurich after our elopement. We went back to the hotel and enjoyed ourselves as we did on our honeymoon, but before I slept I wrote:

If rural France is about the lifestyle, the Loire Valley is about the Fairytale. Even though I’m tucked tightly into my bed, my heart is doing cartwheels down the street. 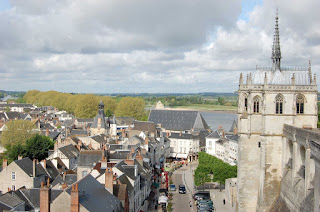 The streets of Amboise from Amboise Castle 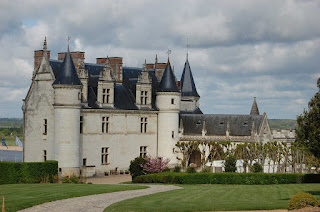 Chateau Day in the Loire Valley. My notes were slim; the memory was captured digitally.

All pictures are from the Chateau in Amboise. There are more photos, from the other castles, available on my Facebook page. 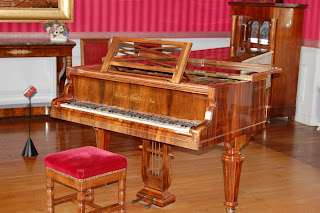 Even the instruments were glorious 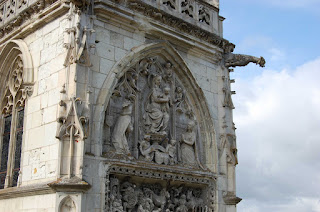 A beautiful reason to go to church? The Chapel at Amboise 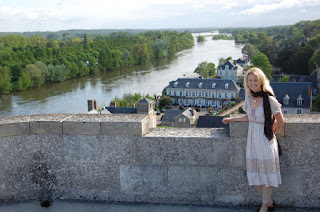 Our Manoir from Chateau Amboise 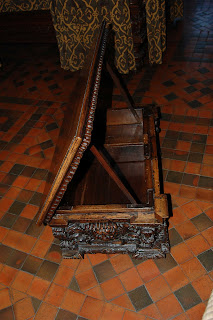 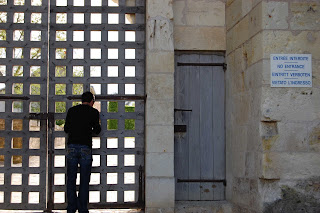 Edwards, always attempting to be where he shouldn't be. 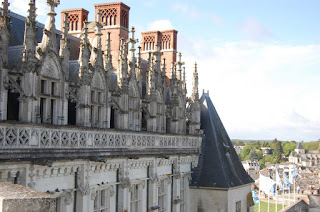 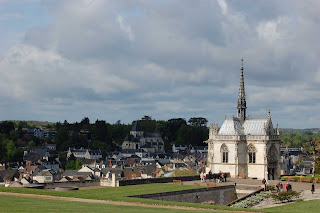 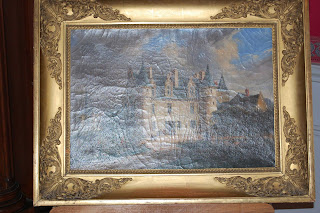 How beauty was captured before the photograph 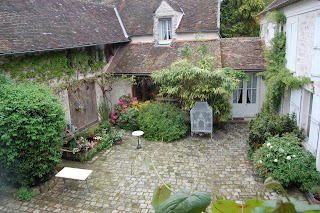 Our last B&B outside of Fontainebleau

After cramming the girl stuff into two days, we were back to climbing and both of us were excited about it.

Edwards had been going on about the boulders in Fontainebleau since our plane landed in Paris. Upon seeing the forest, yes, there is very much to go on about!

The forest is quite lovely, if you like that kind of thing (I prefer the SKY), but it does have 20,000 boulder problems going for it… 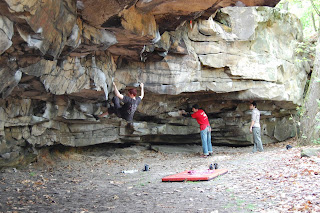 The only dry area in the rainy a.m.

Unfortunately, the rain had picked back up in France and the sandstone boulders were soggy. We managed to locate the one dry, overhanging area in the forest and shared it with a couple of nice chaps for most of the day. 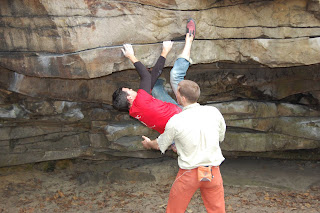 Edwards getting a spot from one of the Brits while he worked this traverse. 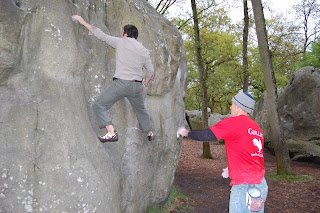 Bill on a dry boulder in the afternoon

Bill Lucia, who had just returned from Bangladesh, was at this dry boulder and he shared the rest of the day with us as well. We bouldered; went into town to view the Fontainebleau Chateau from the outside, have some pastis, the’, café, and snacks; and then went back to bouldering. Later in the day things had dried up a bit and we were able to mess around on some Fontainebleau boulders for real. 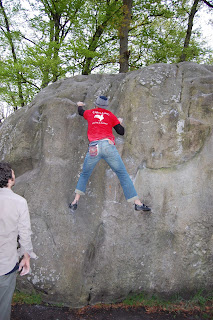 Edwards working a dry problem in the afternoon

We had a wonderful B&B our last two nights in France with very kind owners and a perfect, perfect breakfast. While the dinners our last two nights were utterly disappointing for France, the ambience of the restaurant couldn’t have been better. Adjacent to the Dame Jouanne area was a real back-woods, climbers paradise of old shoes, equipment, rugged service, and cheap eats. The autographed pictures of Lynn Hill and other famous climbers were bonus. http://bleau.info/jouanne/ 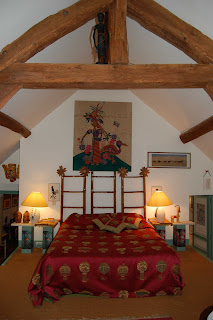 Our last room, fitting that it was called, "Voyager"

And that’s it. Our entire trip in a nutshell.

While this ending to a very, very long blog might seem abrupt, it is not so jarring as having to tear ourselves away from Europe after three and a half weeks, only to come home to Salt Lake City – where our food is dead and our responsibilities lie. The final note I made from our final day…