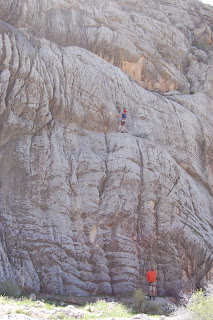 With all the cross-country skiing I did with the dogs did this winter, I didn't think the cold and grey was getting me down. Then we spent a weekend together in St. George... there was sun. Beautiful, warm sun.

Saturday I got to toddle around with Beata and take intermittent naps in the glorious rays while Edwards and Bob worked on their climbing. I found a perfect goat skull on one of my brief adventures and delivered it back to Edwards as a prize. He was impressed. When Edwards asked if I wanted to climb, I was in such a good mood, I said yes! I completed the most perfect pitch in my climbing career right before we all called it a day. Finally, after a winter of hustle, I was outside in a lazy and delicious way! Speaking of delicious... Bob Banks has great eye for mexican food. On Sunday, the boys spotted a new place and encouraged me to stop working and come with them because, "there are Mexicans in there. It's a good sign." In all earnestness, El Amate turned out to be the best mexican food in Utah. The guacamole would have made my Grandaddy proud and flooded my mouth with memories of growing up in El Paso and Las Cruces. The salsas are just perfect for added flavor and the enchiladas... my staple... they were better than any I've ever had... I think... I mean, I haven't been to Cruces in awhile. Everyone, please, eat there! It absolutely must stay in business and right now it is so new people in St. George don't even know it's there.

With three tummies full of the best mexican food in Utah, we headed out for more adventures. Bob's adventure was getting he and Tuco back to Santa Barbara. That adventure sounded super sucky. Our adventure was Mt. Biking with Beata in a wind storm. Our adventure was better. WAY BETTER. Beata sprinted, sprinted, sprinted after Edwards, while we both tried to convince her that she didn't know what she was in for and she'd be healthier trotting along with me. She wasn't having any of it, so she just kept sprinting. Into the wind was hard, wind at our back... we flew. It was joyous. The sun was still warm. 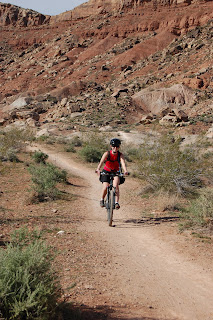 Poor little Beata couldn't barely walk the next day, but she got to rest. We had a full day a meetings with one of us starting at 10:00 in St George, and one of us ending at 7:00 p.m. on the internet in Cedar City. Then... the sinking feeling of heading back to the cold.

What is this white stuff? Where is the sun? We want away. And... away we soon go. The bipeds in our family are off to France, etc., for 3.5 weeks starting Friday. Neither of us can wait.
Posted by Lisa Romney at 7:58 PM 1 comment:

Edwards has decided that in "Amadeus" when Mozart says, "watching italian opera, all those male sopranos screeching... ...stupid, fat couples, rolling their eyes about. That's not love, that's just rubbish." he must have been referring directly to Puccini. 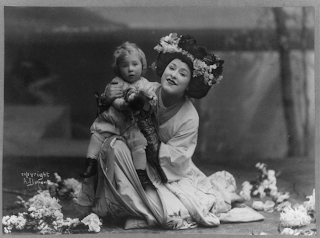 We attempted our third Puccini opera today. Madame Butterfly. At intermission Edwards said, "watching a Puccini opera, produced by Anthony Minguella... I would rather be strung up by my toes and dipped into a vat of boiling oil." (actually, he didn't say that, he said something clever, but now neither of us remember exactly what was said). I also admitted to being quite bored, so, we left.

It feels strange to be opera snobs. When I first started going to Utah Opera performances, they could do no wrong. Now, it is rare for them to do anything right. Blessedly, the Metropolitian Opera started live HD broadcast that, at first, were absolutely captivating and precious in their perfection... today, we walked out.

First, when you see, listen to, perform arias from, opera often enough, you become discerning. It is no longer just music, it is like spending three hours with a stranger, seeing if you get along, hearing what they have to say, and ultimately... you might not like everyone you meet.

Second, when you are choosing to spend three hours in the middle of your Saturday indoors, butts-in-seats, it had better be good. We wracked our brains for a modern soprano who could have made that opera okay... we couldn't think of a soul. We do not like it Sam I Am. We do not like Butterfly Madame. (Really, it's more Puccini's fault directly.)

The upside is, when opera fails you, Utah's landscape doesn't. I picked up Beata for some cross-country skiing in Millcreek Canyon, and Edward's took Tuco climbing in Deaf Smith Canyon. (Note: one winter sport, one summer sport. A few miles apart) My sincere thanks to Puccini for sucking. Had that been a Mozart opera we would have missed a grand day out!
Posted by Lisa Romney at 10:01 PM 1 comment: