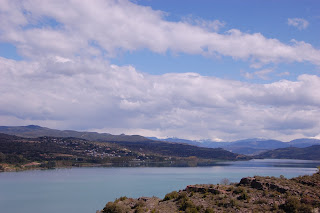 Although it was still pouring buckets of rain in Luchon, our gorgeous hotel was warm and dry inside. With coffee and tea for breakfast, and the company of swallows painted and diving happily all over the walls - artistic and joyful - our moods were warmed for the adventure that lay ahead.

After an exciting drive up the Pyrenees - with Edwards chattering endlessly about cranking on his bike up this twisty mountain road - miraculously, there it was, like a pot of gold at the end of a rainbow, El Sol.

The Spanish mountain towns were glorious with new stone architecture that perfectly mirrored the old, and lush spring mountain climates. Down in the valley's it was a much drier landscape, but familiar and beautiful. Not to mention, the highways were straight and well signed, though we still managed to get turned around a bit on our way to Alcazar. 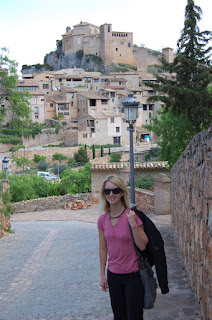 Alcazar. A lovely tourista town. The mountain guide there was very friendly and recommended that we get chalk for climbing at the large market in Anahuesca. "Well, large for around here." In my minds eye I pictured something the size of, gasp, a Wal-Mart Neighborhood Market. I should have been thinking more along the lines of a large 7-11! Anahuesca was pretty much on our way to Rodellar and the mercado was magical. The couple was very nice, and though the wife spoke very good english we still tried to do our best with Espanol. We found chalk, cheese, pastries, other odds and ends, and my favorite Brian Froud book, 'Faeries", but in spanish, "Hadas" Oh, glorious day! The Mercado owners booked us a room near Rodellar in a hotel where we could also get cena - dinner. 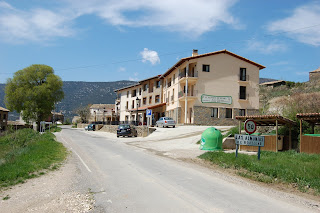 It was very kind of them to book us this room, for we had a wonderful time chatting in our broken spanish (with some assistance from our English/Spanish phrase book) with the owners. Their son is currently playing basketball for Midlands, TX and is being recruited by the best college teams... Kansas, etc. They wanted to know which team Edwards thought was the best... all of them were impressive teams. Their kid must be an amazing player! We would discover all this over cena a la ocho, but after checking in, we ran to check out the cliffs at Rodellar. 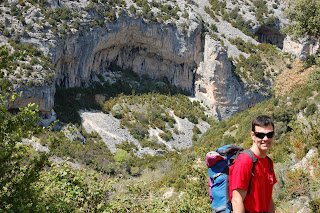 First glimpse of the cliffs in Rodellar

Talk about making it to Mecca! Until this day I was luke warm on climbing in general. After a few hours at Rodellar, I have to admit to being pretty stinking stoked! Now I'll climb anywhere, so long as the next time we go to Rodellar I can make a reasonably impressive showing on more of the routes. Of course, I'll only be impressing myself. Most of the climbers there are GOOD climbers. Better than I'll ever be. We explored the entire valley within sight, and crossed the FREEZING river twice, but settled on climbing at El Camino... one of few walls with routes easy enough for me. 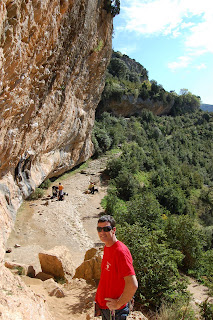 I can't say enough about El Camino. Belay bolts say it all... a secure belay for a 100 pound girl to belay her husband in comfort. AWESOME! The Spaniards have yet to let me down!

All in all, this was an amazing and perfect day. I can't wait to explore more of Spain. Apparently I've made it sound so fantastic even my younger brother bought himself and his friend a couple tickets to Madrid to go see what all the fuss is about. They were not disappointed! Espanya es muy bueno! 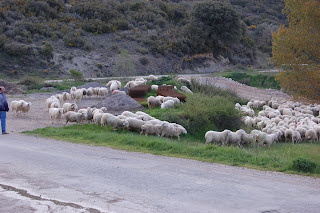 Wednesday turned out to be another perfect, sunshiny day in Spain. Edwards rounded up coffee in the morning, and happened to catch the morning sheep round up through town as well. He says it was quite the attraction. After breakfast, a few important purchases (olive oil), and checking out we headed back to El Camino cliff. It didn't take long to get worn out. The climbing there isn't easy, so fully pumped and with a little more exploration on foot, we had to hit the road back to France. 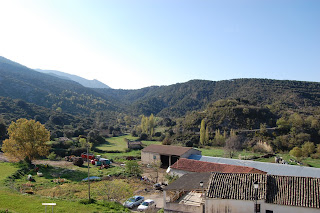 View from our room at the inn 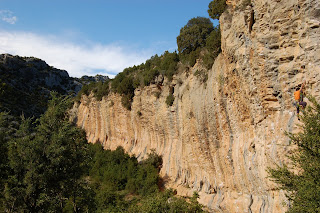 We made one last stop at the Mercado to thank them for their help and pick up some more delicious road trip food. We met a refugee there this time. He was from, oh no! I can't remember the African country, but... somewhere and was excited to speak English with us. He was not as in love with Spain and wanted very much to join his brother in New York City. Apparently he wanted to work hard and make some money, and the Spanish lifestyle shuns such things... not a bad in our book, but I can see where he is coming from. 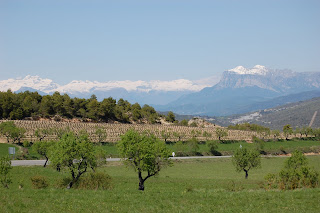 Our drive back over the Pyrenees (for the last time) was filled with more spectacular scenery, and while we had much to look forward to during our last few days in France, we were sad to say goodbye to Spain. No worries though, we'll be back for more exploration soon. Yeah, as soon as I have available vacation time again! 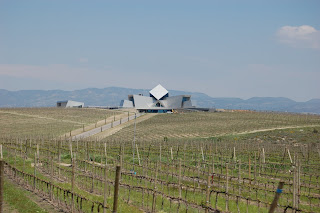 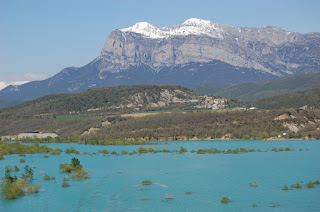 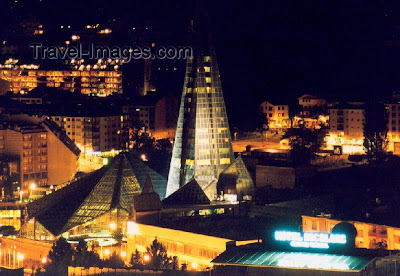 After Sort we drove back over the Pyrenees to Luchon. It was a downpour and town was deserted. It is probably quite nice in the right season, but that night of, "it's raining it's pouring the old man is snoring..." just really made us anxious to get back into Spain.
Posted by Lisa Romney at 4:49 PM 3 comments: