Something my loving husband does is let me put mermaids up in prominent positions around the house. Once, when he was sick and trapped on the couch, he even let me put in the Hans Christian Anderson \ Japanese Animation DVD of The Little Mermaid that I used to watch when I was a wee babe. He's the best husband ever.

My fascination with mermaids comes from how stubborn, hard working, and creative that sweet and feminine creature was. And how loving her spirit remains.

Today, the ROYAL "WE" bought OUR first mermaid. She is glorious. 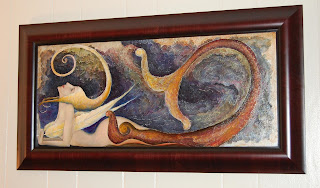 We also had a wonderful day at the Utah Arts Festival. We had beer and brats, and caught some music by our friend Misty Murphy before coming home with our new oil painting.

Yesterday we rode up Emigration Canyon on our Tandem. I love that bike. I always say it is because, "when I'm suffering - at least he isn't still getting away from me"... there was a moment on the climb that I wished he could get away so I could pedal at my own pace. I survived and it's good training. He took this picture at the top. My friend, Amanda, gave me the flashy jersey. I don't look like a gorgeous mermaid, but I doubt they'd look so pretty all dried up either. 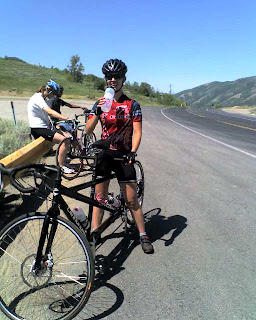 For some strange reason (eloping to Switzerland, buying a house, throwing a party, injuries, etc.) our focus has not been on fitness and training this year. It has been six months of relative inactivity for the Romney/Edwards clan until this very day when two of us got off the couch and kicked some serious tail!!!! (pun intended, you'll see.)

Edwards recently looked into a duatholon called The Battle At Midway (BAM). He might have taken a pass on the competition but one of the categories caught his eye... DOGGIE "DOO"ATHALON. A category for humans and their dogs.

Beata isn't a pup anymore, and she's never run at a human cadence. We know she is fast in short sprints, but neither of us knew how she would hold up for the 10K. As for Edwards... he hasn't jogged more than a couple steps since last November. He did get on his Mountain Bike yesterday, but I wouldn't call it "training".

All of this added up to an Adventure, so we loaded up the car... mt. bike, race shoes, leashes, and poop bags... and made our way to Heber City this morning. Beata and Edwards were the team. The challenge: Run 5K of trail with your dog, Mountain Bike 11 miles while dog waits back in the transition area, Run another 5K with your dog.

They started the race by firing off a snow cannon. Twenty six minutes later the two of them came back... happy as clams and in second place for the "doo" category. Edwards jumped on his bike, Beata got some water and waited impatiently for him to return. 5K, hah! She was just getting warm. The biking wasn't easy and took everyone some time. Edwards rolled in, in first place for the "doo." He thought it was pretty cute when I handed Beata back and said, "She's ready to run" and they took off. Another twenty plus minutes later and our CHAMPIONS came running past the finish line!!!! Woo Hoo! 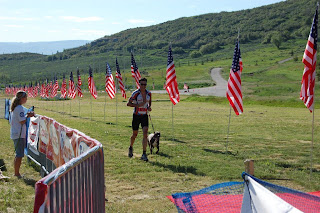 Overall, I would say this was the best morning of Beata's life. I wasn't on the trail with them, but the story goes that she would look back and pick up the pace when other dogs closed in on them. She was hungry for first. She couldn't have been prouder.

Ratso was also in his element: bumming bagels, sniffing the joint, and locating the food. "Hey, you got some pizza there? Pizza's over here guys!"

I am just a proud and amazed wife and dog mom. I'm related to the two best off-the-couch athletes in the whole world! WooHoo and ArrOoooo!
Posted by Lisa Romney at 6:46 PM 4 comments:

Thanks For Joining Us! 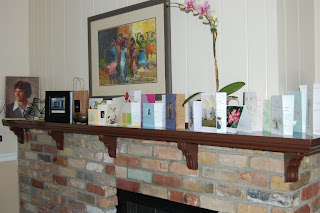 Here's a pic of the cards we got at our party. We're still waiting on some more photos to post, which should be coming soon, along with our official tandem shot. Thanks to everyone for coming to our party, especially all of you who came from out of state! The weekend couldn't have been better. High school "Dirk Diggler" shot came courtesy of my mom and has greatly impressed Romney ever since. Yeah, that's right.
Posted by Steve Edwards at 5:30 PM 2 comments: 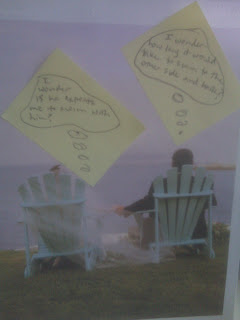 Shout out to the folks at Beachbody for their wedding presents and oh-so creative (and oh-so true) card (click on the pic to read it). I think we've probably got Jude to thank for the creativeness on that front. We should have a pic of us whipping a shake with the blender or sipping some coffee with the over-the-top but very cool coffee grinder from Team Saeco but, since we haven't managed to snap that one yet, we'll provide a pic of Jude's handiwork instead.

Beachbody rocks.
Posted by Steve Edwards at 3:50 PM No comments: 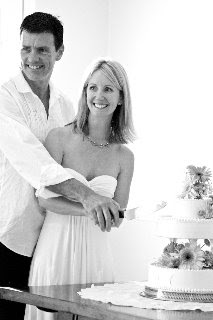 Given that very few of the 50 or so people here on Sat signed this blog when it was right in front of them we're not going to hold out much hope for an improvement via email. But since at least some of you will want to look at pics you've got a few more chances. It's easy. Really. You don't have to be signed in. Just write something.

Anyone who didn't make it last weekend missed a fun time. I do believe the Frank Sinatra toast was overheard more than once. "Here's to absent friends. Fuck 'em."

Here is Bob's slide show. More pics will get posted as they roll in this week. You'll want your sound on, though only some of you will get it. Jackie Treehorn draws a lot of water in this community.