One thing I decided would be good to do during my raw challenge is attend a raw cooking class. This is a pretty big deal for me having never attended a cooking class in my life and even somehow "missing out on" Home Economics in high school. Sure it is the last week of my challenge, but still worth it and I might learn something.

I didn't know what to expect, so much so that I didn't even think of the basics... a raw cooking class = Hippies. THE WEIRDEST OF ALL HIPPIES. 15 minutes into the class I leaned over and said to Joanna (It's a girl thing. I had to bring a friend), "The hardest part of my challenge is going to be sitting through this class." She said, "No, shit" or rather she would have said, "No, shit" if she hadn't given up swearing for Lent, so she probably really said, "I know, right?"

The students were "sincere" and the teacher was an adorable disaster. Had she only been a disaster, we would have left, but watching her stumble and bumble was cute and endearing so we stayed. I didn't learn much new (certainly not how to hold a knife or chop vegetables competently) but we did walk away with two delicious raw recipes. One of which we tried out at an impromptu dinner party tonight.

Then you toss all this together and you have a miracle of delicious "Mushroom Alfredo Sauce" with "Pasta". True, this dish would be better in the middle of summer, but after 30 days of raw anything at home that is this flavorful is the best of treats.

Also, since Joanna is a brilliant dessert maker, we embarked on our first raw dessert. Chocolate Mousse with Strawberries and Cashew Cream.

This was another miracle. A three layer dessert miracle. It looked almost exactly like this picture and tasted as good as you imagine.

Edwards said when I embarked on my raw challenge that some girls don't loose weight when they go raw because they eat too many nuts. Well, um, GUILTY! I consumed about 3 lbs of creamed cashews tonight and loved every second of it. Plus, I got to entertain friends over an amazing dinner, which is always the most gratifying part of life.

KIDS: TRY THIS AT HOME!

Oh and... I made the dessert again the next day in honor of Edwards'return home... the picture doesn't do it justice and you can't see the chocolate, but YUM! 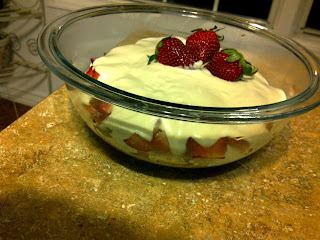 I'm sick of this diet and not even really doing it. This food looks great, however, and I'm sure I'll appreaciate it even more once I'm not getting 80% of my calories from nuts and seeds.